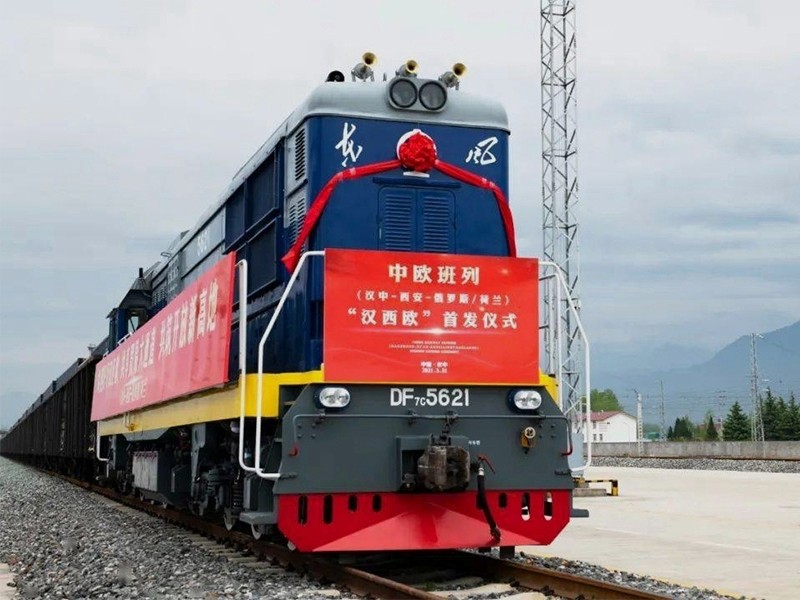 A fully-loaded freight train bound for Europe departed the city of Hanzhong in northwest China's Shaanxi Province on Wednesday, marking a new station on the route map of the China-Europe freight train service.

The train carrying over 1,100 tonnes of precision instruments, daily necessities and other commodities first stopped at the provincial capital Xi'an before splitting into two routes -- the Netherlands' Rotterdam and Russia's Moscow, respectively.

Located in the Qinba Mountains, Hanzhong is the hometown of Zhang Qian, a royal envoy of China's Han Dynasty (202 BC-220 AD). Zhang's diplomatic mission helped forge the prosperous trade route, which is known as the Silk Road today.

The train, the first of its kind in Hanzhong, embodies the legacy of Zhang and aims to facilitate the opening up of the mountainous region, said a manager of the rail service.

Since the first China-Europe freight train left southwest China's Chongqing Municipality in March 2011, China has launched the service in over 60 cities domestically connecting them with major European countries.

When the COVID-19 pandemic impeded sea and air transport, the freight train service emerged as a reliable choice in global logistics thanks to its safety, stability and efficiency.

The trains made 12,400 trips last year, up 50 percent year on year. The freight train service also helped with the global fight against COVID-19 by transporting a vast amount of medical supplies to many countries.

The recent blockage of the Suez Canal, which disrupted global shipments for days, has further underscored the advantages of the freight train service, according to industry insiders.

Though traffic has started to resume in the canal earlier this week, it would take weeks for the backlogged ships to pass through. This has prompted cancellations of shipping schedules by major global shipping lines, said Xie Yuanpeng, a manager of the international service at the Sinotrans Chongqing Logistics Co., Ltd.

The cancellations have made many Chinese and European companies compete for space in China-Europe freight trains as they want to deliver goods on time, Xie said.

"Whether the ships are waiting on site in the Suez Canal or taking a detour around the Horn of Africa that takes about 15 days longer, companies face huge costs in terms of time and capital with the possibility of price hikes in April and May," he said.

Under such circumstances, the freight train service is much more speedy and convenient. "Take the Yuxinou train as an example. It only takes about 14 days to reach Germany's Duisburg from Chongqing, which is one-third of the time by the sea," Qi said, adding that the train has been running on a regular basis even during the pandemic.

"It only took a month for the train to arrive in Chongqing from Spain, 50 days shorter than the sea shipping route we used to take as it was delayed during the pandemic," said Zhuang Changbo, the company's director of logistics.

"With the China-Europe freight train service, we no longer worry about any disruption of maritime traffic," he added.