Five days after a skyscraper-sized container vessel was dislodged from the Suez Canal, the backlog of ships waiting to cross through the Egyptian waterway has been cleared, the canal authority says.

When the 1,312-foot Ever Given ship ran aground March 23, it blocked canal traffic, grinding maritime shipping to a halt at one of the world's busiest waterways. During the six days the Ever Given remained stuck, more than 400 ships were stranded at the man-made canal, which connects the Mediterranean to the Red Sea.

But after a flotilla of tugboats finally freed the vessel on Monday, traffic resumed. Late Friday, the chairman of the Suez Canal Authority told an Egyptian television station the remaining 61 ships would pass through the canal on Saturday. 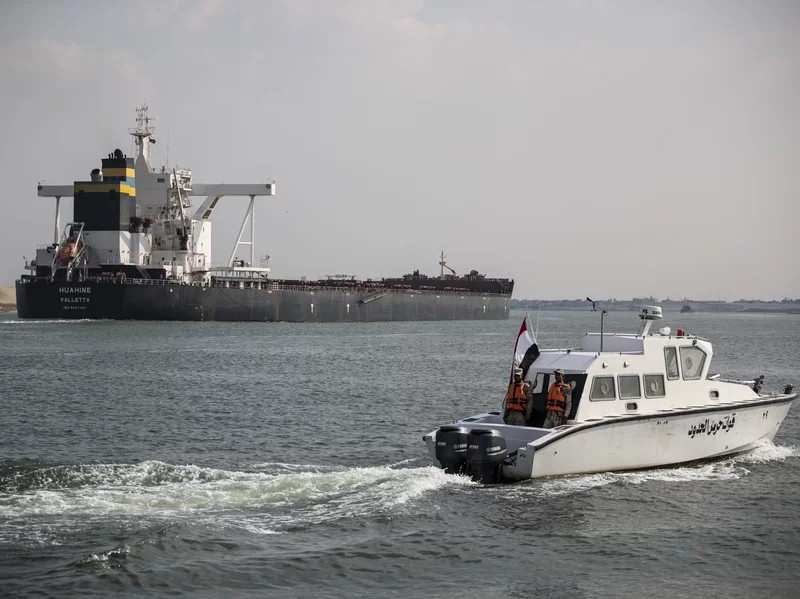 (Traffic through the Suez Canal has returned to normal, the canal authority says. Here, the Huahine is seen crossing the canal on March 30 in Ismailia, Egypt.)

Chairman Osama Rabie told MBC Masr that in total, 85 ships were expected to pass through the canal in both directions Saturday, according to Reuters. The canal authority began an investigation Wednesday into what exactly caused the Ever Given to run aground and block the waterway. That investigation should be complete within two days, he said.

Experts say bigger ships have been constructed over the past several decades as demand for consumer products has grown. The Empire State Building-sized Ever Given isn't an anomaly; more than 100 similarly massive ships are traveling the world's waterways — with even bigger ones under construction.

Marine-risk analysts have long warned about the concerns of ever-larger ships, Capt. Andrew Kinsey, a senior marine-risk consultant for Allianz, told NPR this week. "We've been trying to raise the issue for a very long time," he said, calling the Ever Given incident "a warning" of things to come.

Fortunately, the world shipping can finally return to normal, which also let all traders relieved.