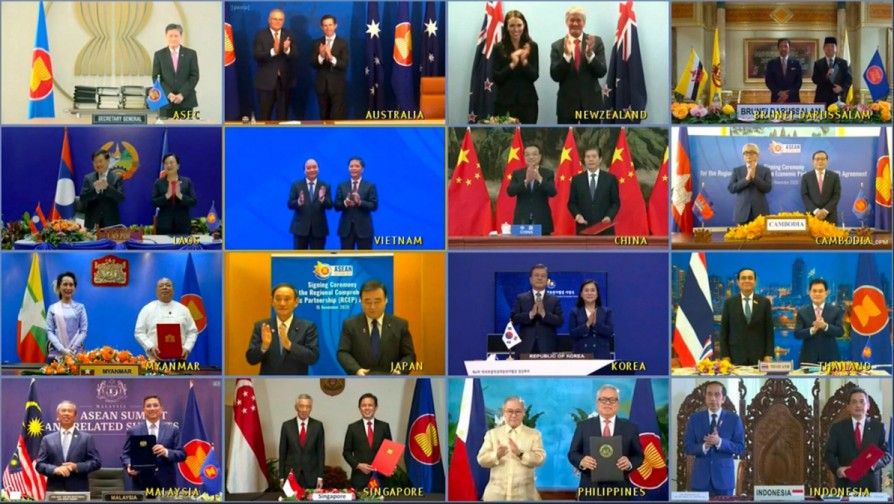 (The leaders and trade ministers of the 15 countries in the Regional Comprehensive Economic Partnership posing during the signature.)

After eight years of talks, China and 14 other nations from Japan to New Zealand to Myanmar on Sunday formally signed one of the world’s largest regional free trade agreements, a pact shaped by Beijing partly as a counterweight to American influence in the region.

The agreement, the Regional Comprehensive Economic Partnership, or R.C.E.P., is limited in scope. Still, it carries considerable symbolic heft. The pact covers more of humanity — 2.2 billion people — than any previous regional free trade agreement and could help further cement China’s image as the dominant economic power in its neighborhood.

It also comes after a retreat by the United States from sweeping trade deals that reshape global relationships. Nearly four years ago, President Trump pulled the United States out of the Trans-Pacific Partnership, or T.P.P., a broader agreement than the R.C.E.P. that was widely seen as a Washington-led response to China’s growing sway in the Asia-Pacific region. Joseph R. Biden Jr., the president-elect, has been noncommittal on whether he would join the T.P.P.’s successor.

To some trade experts, this new agreement shows that the rest of the world will not wait around for the United States. The European Union has also pursued trade negotiations at an aggressive pace. As other countries sign new deals, American exporters may gradually lose ground.