China's exports have risen at the fastest pace since February 2018 in November, helped by strong global demand and as the factory recovery in the world's second-largest economy outpaces those of major trading partners.

Imports rose 4.5 per cent year-on-year in November, slower than October's 4.7 per cent growth, and underperforming expectations in a Reuters poll for a 6.1 per cent increase, but still marking a third straight month of expansion. 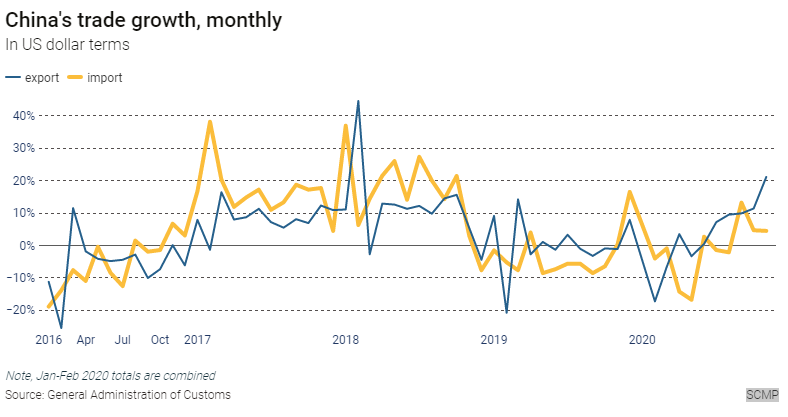 That has led to a trade surplus for November of $US75.42 billion, the largest since at least 1981 when Refinitiv records began. It was also wider than the poll's forecast for a $US53.5 billion surplus and a $US58.44 billion surplus in October.

China's exports were supported by strong overseas demand for personal protective equipment (PPE) and electronics products for working from home, as well as seasonal Christmas demand, Nomura analysts said in a note.

"We believe China's export growth could remain elevated for another several months due to the worsening COVID-19 situation overseas," the note said.

However, they noted some signs that demand for these pandemic-related goods was losing momentum.

Booming sales of fridges, toasters and microwaves to households across the locked-down world have helped propel China's manufacturing engine back to life, super-charging demand for key metals like steel, copper and aluminium, after a sharp slump early in the year. 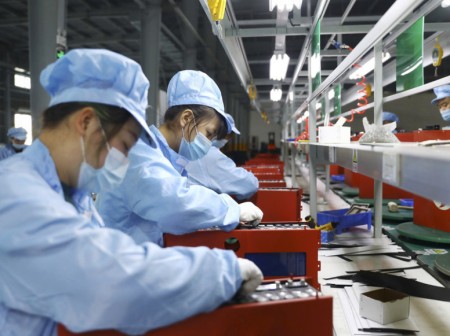 (Employees work in the workshop of a lithium battery manufacturing company in Huaibei, eastern China, on Nov. 14. China posted a record trade surplus in November, led by a surge in exports to the United States.)

In another sign of brisk trade, China's export surge and the low turnaround rate of containers from abroad have triggered a recent shortage of containers domestically, state media China Daily reported.

A spate of early month economic data showed China's economic recovery from the coronavirus pandemic has stepped up, with manufacturing surveys showing new export orders expanding at a faster pace for November.

A sharp appreciation of the yuan in recent months could also cloud the outlook for exporters. Some firms reported that a strong yuan squeezed profits and reduced export orders in November, the statistics bureau said this week.

The yuan has booked six straight months of gains, its longest such winning streak since late 2014, and is trading at 2-1/2 year highs.

The strong exports widened China's trade surplus with the United States to $US37.42 billion in November from $US31.37 billion in October.

While a Biden administration is expected to soften some of the diplomatic rhetoric seen in strained US-China trade relations in recent years, there are no immediate signs the President-elect intends to unwind the punitive tariffs introduced under the Trump administration.