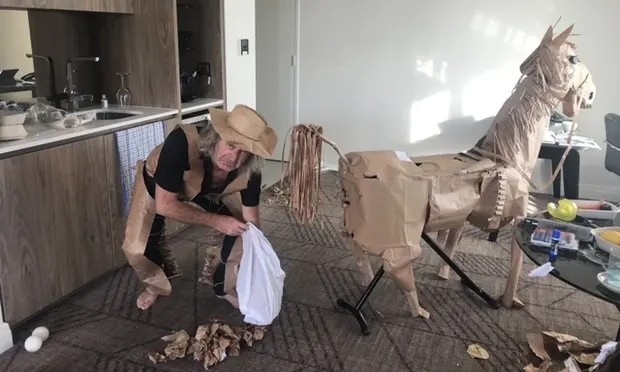 Ten days into his fortnight of mandatory quarantine in a Brisbane hotel, David Marriott sits in his room caressing the mane of his horse, Russell, as he looks out on the overcast city.

A used poke bowl sits on Marriott’s head, in the style of a cowboy hat. He’s also wearing a vest and chaps – attire he fashioned out of the brown paper bags that carried the meals dropped at his door.

He used the same material to create Russell’s skin, which is wrapped around his ironing board torso and desk lamp head.

The Sydney-based art director has been making the most of his prop and costume design skills since entering Australian quarantine following an unplanned trip to London for the funeral of his father, Harry, who died unexpectedly in late February after entering hospital following a fall, ultimately succumbing to Covid.

He had been expecting “a long two weeks” after observing a similar isolation period at his sister’s home when he landed in London, so he had tried to prepare for as smooth a return as possible.

Dreading boredom, Marriott bought a portable speaker so he could play music, and ordered several balls, planning to teach himself how to juggle.

But days into his quarantine stay, Marriott became distracted.

He had been collecting the brown paper bags his meals came in, frustrated that the hotel would throw them out with general waste instead of recycling them – the disposal practice for all waste from quarantining guests’ rooms. 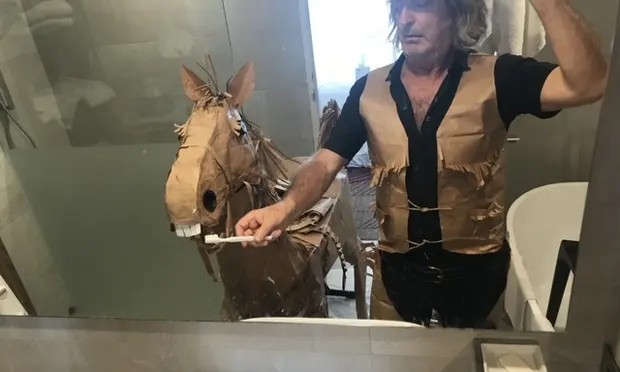 “I’ve worked with that medium before, as it’s got a great structure to it,” he said.

He then ordered a pair of scissors and some tape from a local supermarket.

On day three of his quarantine, he had poke for lunch, which arrived in a round paper bowl.

“I thought, that’s a hat, if I add some brim to it. That was the beginning of the cowboy, and the vest and the chaps came naturally.”

Stuck as a cowboy without a horse, Marriott contacted the management of the Rydges South Bank hotel to request boxes to construct Russell.

But liking the challenge, Marriott instead told himself he could make the horse without boxes, noticing the ironing board and desk lamp in his room.

“The bones were already there.”

“Now I’ve got Russell here, and I think a dog and cat could be next,” Marriott said. 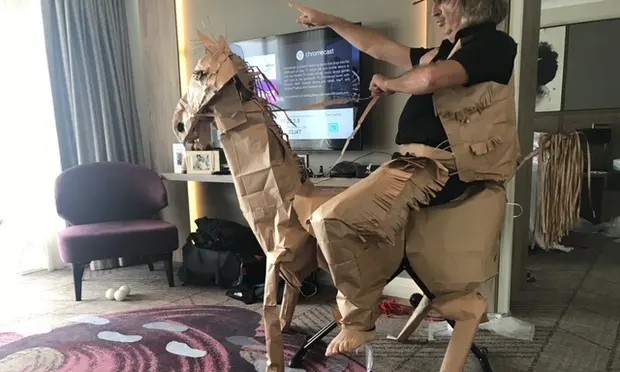 (David Marriott: ‘Now I’ve got Russell here, and I think a dog and cat could be next.’)

Marriott has also been in frequent communication with the hotel’s management, requesting a pet walking service for Russell.

Seeing the lighter side of the request, a hotel manager responded: “It be-hooves me to ask that all individuals (equine or otherwise) please remain in their rooms for the duration of their quarantine. I trust your noble steed is stable.”

Marriott said the staff have appreciated his requests, in a hotel where they rarely have any interaction with guests.

He also said his creations have cheered up his mother and sister, who he has introduced to Russell via Facetime calls. 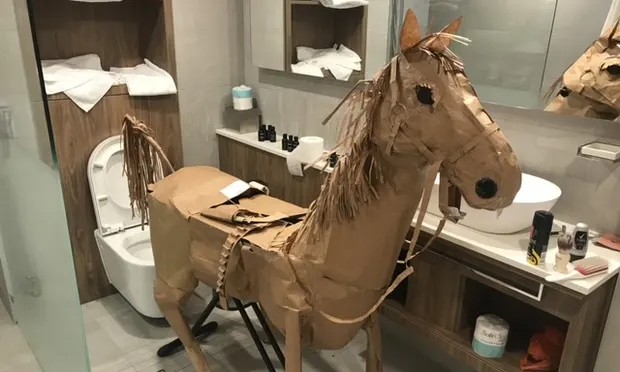 (David Marriott’s paper horse: ‘It made my mum laugh, which has been the best. To see her laughing again has made it all worthwhile.’ )

“It made my mum laugh, which has been the best. To see her laughing again has made it all worthwhile.

“People are just in need of a bit of laughter. This lifts their morale,” he said.

Marriott had hoped to recreate a scene from the Godfather by planting Russell’s head in his bed for cleaners to find at the end of his stay.

“But I don’t have anything for the blood to make it work,” he said.

Marriott hopes his art will draw attention to a lack of recycling in hotel quarantine, and provide others with ideas on how to use their quarantine time creatively.

“It transports you to an alternative universe, out of quarantine. It’s a bit like dreaming,” he said.